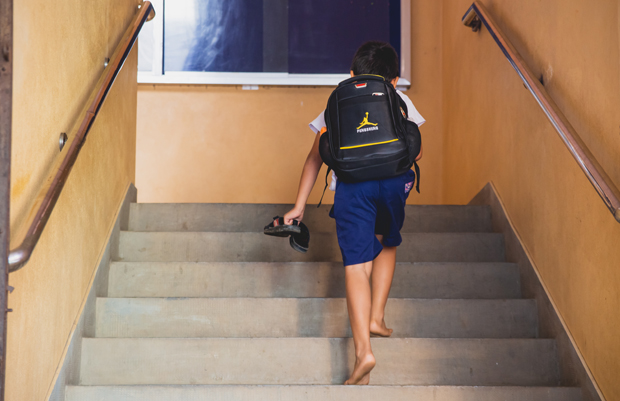 Yasin is 13, but he looks taller than his age. He’s described as a happy, clever, and a polite boy, but Yasin has had to work hard to start healing from the trauma of his childhood. When he was younger and living at home, Yasin tended the sheep of a rich man. One day, he was working when a villager came running to him to tell him that his house had been burnt by the Taliban. Yasin returned home to find only blood, dirt, and dust. He returned to the fields, and spent the next few weeks living with his boss.

Not long after this, Yasin was approached by men who told him they would give him an education if he went with them, so he willingly went. The education he received was not the one he had longed for. He received military training. The men told him and the other boys living there that if they became suicide bombers, they would go straight to heaven and their lives would be perfect.

The day came when Yasin was called upon to complete his mission for them. He was given an explosive vest and told to press a button when he reached the police station. As he neared the station, a police officer discovered him and arrested Yasin. The police took Yasin in, and that’s when Yasin was referred to Forgotten No More.

When Yasin arrived at Hagar, he showed significantly high levels of trauma. He was fearful and wouldn’t engage in conversations. Yasin always looked lost in thought, and would often have nightmares and wake up weeping. He would sometimes refuse food. His counsellor gently worked with him, and slowly but surely Hagar staff started to see signs of change. Yasin started to make friends with the other boys. He has been attending school lessons, and he is learning well in his classes, alongside learning practical skills. Yasin enjoys cooking with his Hagar house father. He is described as a happy, clever, and polite boy.

“I would like to be educated better, but I know that I have missed out on a lot of education and I am now older than other boys.  if I can catch up then I would like to be a doctor as when I visited them I could see it was a good job.”

It’s the hope of Hagar’s staff that Yasin will be reunited with his family in the future, but until then, he will continue to heal with the help of Hagar.