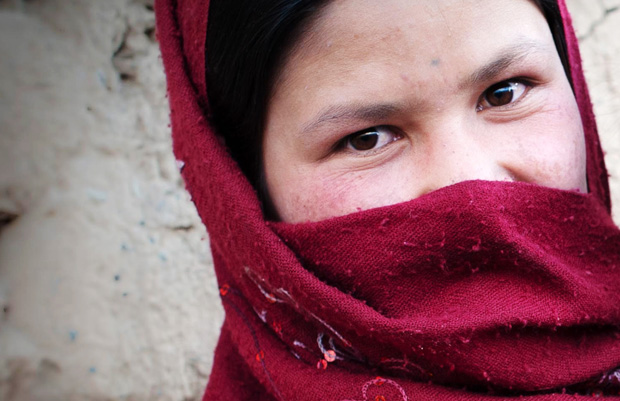 “When someone gets married her life should change for the better, but when I got married, my life changed for worse.”

Before she got married, Amena’s dream of married life was that of a happy,loving and safe environment. But her dreams were shattered the day she became a wife. Her husband was a violent man and would repeatedly beat her saying she was barren. Three years into her marriage, she gave birth to a daughter then shortly after, a son.

Her husband travelled to Germany for work, where he remained for seven years. During that time, Amena and her two children lived with her in laws.  But when her husband returned to Kabul her quiet life changed drastically. The beatings worsened. Amena’s husband would rape her repeatedly and started beating all three of them, in particular Amena and their daughter.

Amena’s husband was not a good man, and as her daughter grew up, he started acting strange around her. He would ask her to sleep in a different room to her mother, going against the Afghan tradition where all women sleep in the same room for safety.

“She is my property, I will do with her what I want” he would tell Amena. His obsession with control worsened over time. He would follow his daughter to school, and if she wasn’t the first girl to exit the school gates, he would beat her severely. When her teacher asked her about the bruises on her face, the young girl told of her father’s violence against her. Her teachers told her to never mention it again, and that she should just say that she fellor injured her face against the window.

Aged 14, the young daughter was sexually assaulted by her father. When Amena confronted her husband about this, he violently beat her and took to beating their son also, even though he had serious health problems. He would lock the children in the house, only allowing them into the yard to use the bathroom. He would tell Amena that he didn’t love her, didn’t need her there.

“When I think back to those times, I laugh. I didn’t feel human. How can a human endure such beatings, how could I have taken more beatings that is physically possible, to my face, arms, all over my body?”

For two more months, the violence continued and he started beating his parents too.

“The beatings continued, and I feared for my life. I was close to giving up hope”

Finally, Amena’s father in law told her “you’re a human, you have pain in your body, you have problems with my son. Please leave home and take your two children and go far from here.” He had arranged for a cousin of his to meet Amena and provide a safe place for the family. But when she arrived at the location, he was nowhere to be seen.

Amena was alone on the streets of Kabul with her two children, helpless. A kind soldier took pity on her and directed her to a human rights NGO located nearby which then later referred the three of them to Hagar’s Transitional Care Centre (TCC) programme.

“I knew my son had healthy issues but had never been able to go to the hospital until now. Hagar allowed us to go for medical checkups, all three of us. I am so thankful for this.”

Due to high risk of kidnapping or worse from the father, Amena’s children haven’t been able to attend Government school. They receive tutoring within the TCC and have excelled at the Government exam papers.

Many steps have been taken against the husband. However, he comes from a very powerful tribe, and has contacts in high places and so this prevented any actions from being taken against him. He was excused from court and the case was laid to rest. The first General Attorney was in favor of the case, but once another general attorney took command, he and his workers refused the case. On several occasions, Hagar’s legal and protection officer has been followed to the offices. Hagar believes that the husband is influencing the new general attorney. He goes to the human rights NGO twice a month, claiming his right to have his two children back. He does not want Amena to go home. He walks around with a gun and acts violently, which is why there is such a high safety risk.

“All my daughter wants to do is forget and move on. She wants to learn as much as she can so she can one day have a good job and do well for herself. All I want is seek safety for my children, far from my violent husband.”

Today, Amena and her children are receiving in-house catch up education from Hagar’s TCC programme.

“I am so happy and satisfied to be living here. I feel safer than ever before. I appreciate the medical checkups, and opportunities for me to make an income which we stay at the TCC. But, this is no life. I cannot send my children to school as the risk is so high.”

“I understand that I am a human now. I used to only have beatings and harsh words against me, but now, I have breakfast with my children and the other ladies. The only worry is now for the safety of my children. I am so grateful and happy for all the kindness Hagar staff have shown me.”

“Hagar pursues the highest degree of care and protection for each of its clients. To protect the identity of our clients, names have been changed and images do not necessarily represent the individual profiled.”